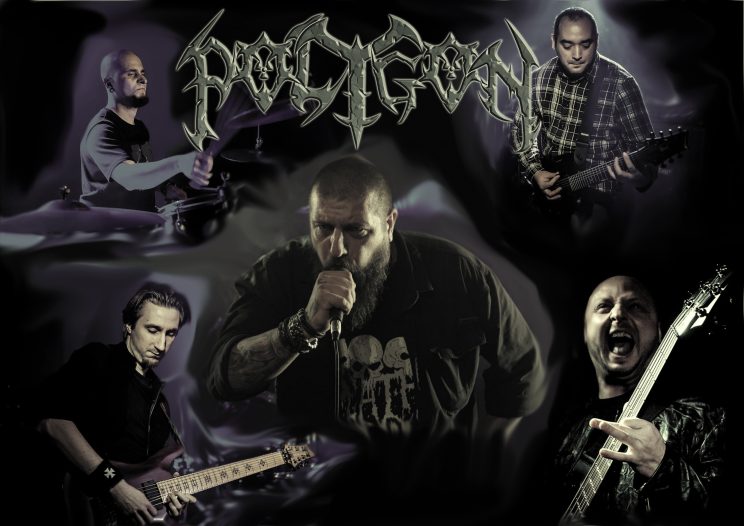 POLYGON is a death metal band from Bulgaria, formed in April 2017 by Kostadin Philipov (vocals).

In fact, the idea popped up in his head back in 2015, after his wife bought him a guitar as a present, making him get back to music after so many years.

Soon after, he made a private practice studio and started to look around for other musicians.

It turned out that finding the right people to make music with in Plovdiv, Bulgaria was not an easy task.

After a few months of searching, the first guy who answered the ad was the drummer Galabin “Mushroom” Kiryakov.

They got together and started making own music.

Not so long after that Ivan Zlatanov (guitars) and Hristo “Root” Bakalov (bass) also joined the band.
The first few songs (Tank, Bloody Corpses and Crazy in Madness) were created in that period.

After a series of live shows, the band felt the necessity of a second guitar player, and Stanislav Hasov (rhythm guitar) was invited.
Already picking up some momentum at the local stage, Polygon parted ways with the Root.

Ivan also left just a few months later.
Luckily, that was not the end of the story for Polygon.

The band quickly got back on track when Mihail Kulov (bass) and Boyan Vasilev (guitars) joined.
With their new appearance and sound, the things for Polygon started to evolve at a quick pace.

The first album “Rotten Soul, Dead Flesh”, containing 7 tracks, was recorded in the spring of 2019.

It was produced by the band without any external support and was released on 22nd of May 2019.
In the summer, after a number of gigs in Sofia and Plovdiv, the Mushroom left.

He was replaced by the fresh blood Vasil Bohorov.
In October 2019, Polygon recorded a video of the song “The Swine”, portraying the story of a brutal serial killer.

The official premiere of the video took place on the 2nd of December 2019.
Polygon is now preparing their second album, which is expected to be recorded in the summer of 2020.