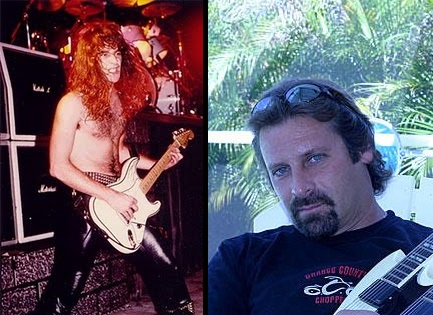 > 01 – Hello, first of all, thank you for answering this little interview for Bathory´zine.

Your very welcome.
>
> 02 – After Overkill’s departure because of your differences with D.D. Verni, I lost track of you. I have seen that you have been in several bands ?.

Yes I was busy trying to get in music but nothing worked out. People thought I did nothing but I did a lot actually. From Cycle Sluts, I4NI,Grip, Skrew and Response Negative. And a solo or two here and there.
>
> 03 – Why form a band like Satan’s Taint without some stable members (I think the only fixed one is now the drums)?

At some point when we’re older. The road for some players isn’t possible. And I wanted many great players to maybe get on a cd is it wasn’t available to them. Maybe kick start a career for someone.

>
> 04 – Right now I am listening to your second album and that guitar sound could only be yours. When I have seen the video where you play with the band “Made of Metal” I have had the creeps. Will you continue playing those songs apart from those of your band?.

No that was just for fun. Many of those friends have been in Satans Taint. Just friends.
>
> 05 – What are the lyrics of your songs talking about, are you the only composer?

Yes I write them. Dan one of the singers help on a song. I cover Viking themes. Religion ,war ,revenge.
>
> 06 – What can you tell us about your second album Destruction Rite (2019)?

Well the drummer is the same Jim McCourt is my guy for sure. I used two singers. I wrote all the music ,played bass as well. Financed it myself and released through Megaforce. I’m very proud of it overall. New sounds but an old school feel.
>
> 07 – What can you tell us about your second album Destruction Rite (2019)? What can fans expect with this new album?.

Ritual is me in all ways. Diverse as far as songs. Which I have always done. And my guitar tone for sure.
>
> 08 – Which of the 4 albums you released with Overkill do you like the most?.

I’d say Years of Decay. I finally got a guitar sound I was explains for years. And the songs are all strong. Everyone played great.
>
> 09 – What do you think of the current new Thrash scene?

I’m excited. It’s the strongest it’s been in years. New and old bands.
>
> 10 – You think that in a few years, when the old bands are gone, there will still be a scene within the Metal.

I’d love to with Satans Taint. But for now it will be with Violence.
>
> 12 – Finally, say what you want for the people who read this blog?

I want to thank those that have stayed with me and followed me throughout the years. I appreciate you all. And if you want the first cd or shirts you can go to satanstaintmusic.com