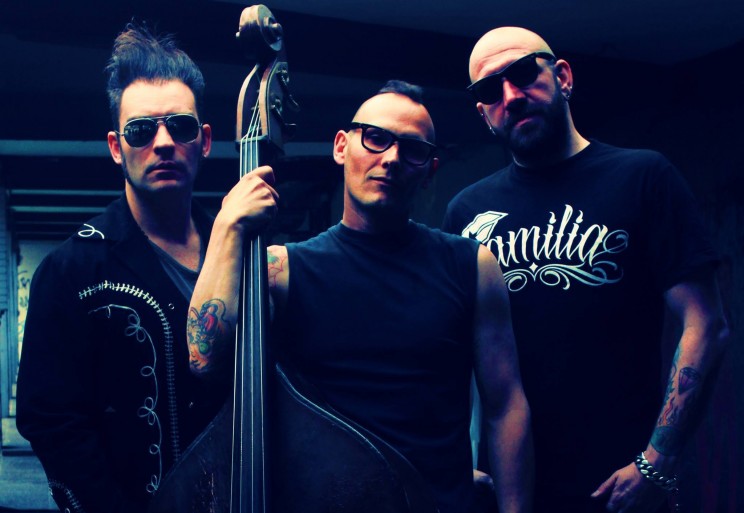 MMP- How did the band get started?

Lucky Dados – We started the band in 1997, carlos lopez the bass player was an old friend of mine and we also had a band before Lucky and after that band was over we did LUCKY DADOS(LD)
MMP- What kind of music do you play?

Lucky Dados – We are so much into rockabilly, but its hard to put a tag, we liked to do a kind of more”wild” rockabilly..our first japanese record label used to call us PUNKABILLIES..so maybe they?re right..

MMP- How has the fan response been?

Lucky Dados –  I think we?re so lucky about that, fans have always given us a lot of support, they re a very big part in LD

MMP- Where did the band name come from?

Lucky Dados –  It came up after the very first LD rehearsal, we were lookin for some name that mixed spanish and english words and we like so much all that swing, vegas and casino?s stuff so we thought it sounds cool

MMP- Introduce the band members and what they do in the band?

Lucky Dados – The members are Carlos Lopez, bass player and backin vocals, Carlos Mirat, the drummer, and me, Pedro Herrero, guitar and singin

MMP- Who writes the music? Lyrics?

Lucky Dados – Music can come from Carlos Lopez or me, we use to take our own songs to the place where we rehearsal and see what we can do together. And all the lyrics come from me

MMP- And where do the lyric ideas come from?

Lucky Dados – haha, i dont really have a clue or method…but most of them come from things that could happen to everyone and most of the cass to me..hahaha

MMP- What is your view in Satanism and Occultism?

Lucky Dados –  We aren?t so much into it

MMP- How many albums/CD’s have you released?

MMP- Tell me about some the songs on the latest CD?

MMP- Do you have any side projects?

Lucky Dados –  yeah, we all three have it, me and the drummer are also in LABELLE, the bass player is also with Marcos Sendarrubias and Baby Horror, among others..

MMP- Who are some of your musical influences?

Lucky Dados –  Oooooh its so difficult to say…we listen from old time jazz and swing, to hard Rock, 50s Rockabilly, Punk…so i could say..COUNT BASIE, STRAY CATS, THE CLASH, SOCIAL DISTORTION, MOTORHEAD SINATRA, COCHRAN, VINCENT….u know..there are so many..

MMP- What is the band like when you play live?

Lucky Dados –  On every show we try to make a very close contact with the audience, we even come down from the stage and play among them, we always try to do very wild shows, so energetic

MMP- Have you guys ever played in another country?

Lucky Dados –  Yes, time ago we were in Berlin and last month we have been doing a kind of mini tour in Netherland and Belgium

MMP- How big of crowd shows up at shows usually?

Lucky Dados –  Well it depends…maybe medium venues, maybe huge festivals…so it depends..we havent any problem playin wherever, big, small, its the same..always tryin to have fun with the audience

MMP- How is the crowd response when you play?

Lucky Dados –  ooooh they use to go wiiillld!!! hahahha, they sing with us, dance with us and i think they have a good time, thats the best for us

MMP- When do you guys plan on writing any new material?

Lucky Dados –  We?d like to release a new album next year…but who knows..maybe soon maybe later..
MMP-  What does the future hold for the band??

Lucky Dados –  Hope that very cool things!! hahhaah, now we?ve started workin with a horn section, THE BORDER HORNS, and im lookin foward to record some new stuff with them.