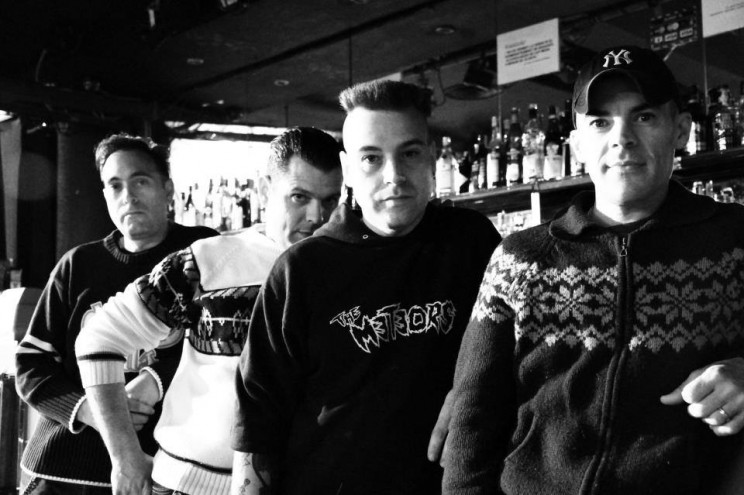 Smell of Kat – We started at the end of 1994. Just some good friends who wanted to play the kind of music they love

Smell of Kat – We play neo-rockabilly with some psychobilly influences, our own kind of rockin

Smell of Kat – The response has been always positive and is always great, now with the internet, to know our music is followed worlwide, there was nearly no internet when we started

Smell of Kat – Smell of kat is the title of an old song of an early finish neo-rockabilly band called Stringbeans.
When we looked for a name for the band, we just wrote some song names down and that’s the one that won.

Smell of Kat – Javi Caballero is the lead singer
Javi Uroz the guitar player
David Mourelo plays the slap bass and do some backing vocals
J.Carlos Carbo plays the drums

Smell of Kat – Normaly all starts from a guitar riff or even some guitar parts with a primary structure of the song, from there we add slap bass and drums and Javi works out a melody.
David writte the lyrics

MMP – And where do the lyrics ideas come from?

Smell of Kat – Find them very interesant, when they are taken seriously, like to read about it
The Devil gave us rock and roll and we are a rock and roll band, so we know where is our side! Hahaha

MMP – How many albums / CD’s have you released?

Smell of Kat –  Our first release was an EP, Raw Beat, in 1997..before that there was a couple of demo tapes on cassette, do you remember cassettes?
Then on 1998 our first CD ” Beware, the Katz!”
And now 17 years later we will publish a new 7″ EP “A dream of a one thousand Katz”

Smell of Kat – Our new EP contains 4 new selfpenned songs of fast and furious neo rockabilly, it will be a limited edition of 330 copies on colored vinyl, 110 blue, 110 green and 110 blue, all handnumbered and will include a download card
Take a taster there :

Smell of Kat –  Javi Uroz has a home studio where he recorded the great Marcel Bontempi and J. Carlos Carbo played drums on thar session. Two takes of that session were published on a limited 7″ single “Dig a Hole”
David Mourelo recorded bass for 3 songs on the latest P. Paul Fenech solo album “I, monster”

Smell of Kat –  To name some: Gene Vincent, Johnny Burnette, Blue Cats, Ricochets, the Sharks and the kings and creators of psychobilly The M3t3ors

Smell of Kat – Our set is made 80% selfpenned songs and 20 % 50’s covers played in our own way.
We try to be energetic and sound fresh and rockin as hell!

Smell of Kat – Yes, we played several times in Germany, we also gigged in UK and Moscow

MMP –How big of crowd shows up at shows usually?

Smell of Kat – Apart of the Psychobilly Meeting where we can play to larger audiences or on gigs and festivals abroad, on smaller gigs here we are a few but we make a lot of noise!!

Smell of Kat – Normaly its good and when they start to wreck, we know we got them!

Smell of Kat – 5 new songs are already written and going for more!

Smell of Kat – We will start gigging as much as possible to promote our new ep, avalaible from september at www.psychobillymeeting.com and start to think on the new one!