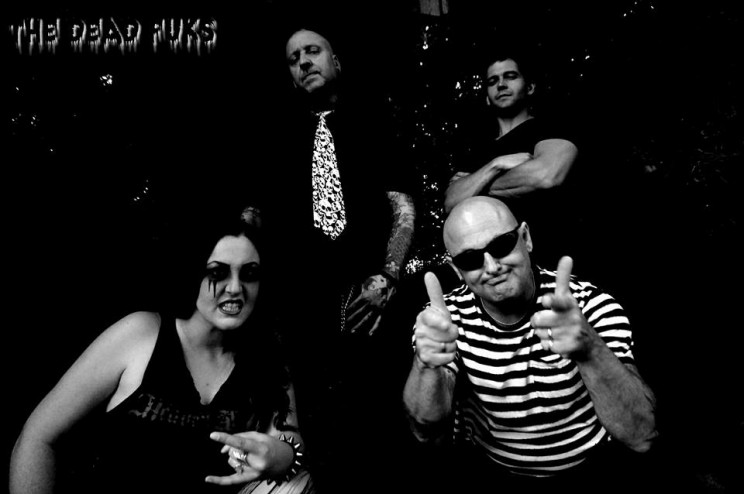 The Dead Fuks – A couple years ago with Kevin The Dead Fuks Drummer and myself on Bass ….the 2 of us were looking to put together a Punk Cover band…we had been jamming for a while,some Operation Ivy,Leftover Crack,Dead Kennedys,Sex Pistols etc.

Our Singer/Bass Player who was suppose to be part of the trio kept blowing us off and not showing to rehearsal
Getting pissed off and frustrated Kevin asked me to pick up a guitar..out of anger I started bagging out some heavy doom/stoner/SluDGY riffs

Kevin and I both liked what we were coming up with so we both starting writing lyrics for our new original tracks
NOW it was time to find a bass player…Trevor came to us and audition and Immediately fit in…now for a Singer!

…..after auditioning numerous Nickelback wannabe singers and getting even more frustrated it was suggested to find a female singer
…within a couple days of looking for this Metal Queen a Local woman named Emilie contacted Trevor for an audition….we listened to Emilie sing 4 bars of one of our originals and we Immediately new we found the voice of THE DEAD FUKS ….the band was Born!!!
….we have been a solid 4 piece now for 1 year!
MMP – What kind of music do you play?

The Dead Fuks – We have been branded Metallic Stoner Punk. …I guess a new genre of music…a mix of Doomy Punk Music with Metal Vocals with a grinding Stoner groove!

The Dead Fuks – Fantastic so far….a little overwhelming. .but in a GOOD Way!…we have lots of Plays,Downloads,Purchases of our music,we have had great sales on TSHIRTS and general Dead Fuks merch
And tons of Show offers on the plate for us!
….we have a Great Fan base and group of loyal followers we are Very great ful for!

The Dead Fuks – A friend who was originally suppose to be the Dead Fuks Guitarist and Singer came up with the name,it sounded very Hardcore and Shocking and everyone we ran the name by Loved it so it stuck!

MMP –  Who writes the music? Lyrics?

The Dead Fuks –  My self I write all the guitar…..Kevin brings the beats and at the beginning Trevor and I both wrote the Bass,now Trevor writes all the basslines and Kevin,Trevor and I use to write the Lyrics now Emilie is the main Lyrisist!

MMP –  And where do the lyric ideas come from?

The Dead Fuks –  For Collaborative Carnage and Hunting Down The Enemy songs which I wrote the lyrics too, they are about my troubled childhood and my past problems with Drugs and Alcohol
..now Emilie does most of the writing and all of Emilies lyrics are about personal experiences in her life!
MMP –  What is your view in Satanism and Occultism?

The Dead Fuks – Growing up Roman Catholic, Religion was thrust on me..I HATE It!!!
I am now prodestant
…but I could not imagine a world without the number 666 or not being able to flash the Devil Horns….for me Satanism and Occultism is as much a  part of Metal Music culture as Guns,Jewelery and Lyrics about Smoking Blunts are to Rap Music!

…I don’t practice Satanism or belong to an Occult but I couldn’t imagine a world without them!
All HAILS SATAN!!! \\m//
MMP – How many albums/CD’s have you released?

The Dead Fuks – We are working on our first Cd/Album as we speak!…..we are in the mixing process!

We have out a 5 Song demo called the Collaborative Carnage EP that you can find at Bandcamp, iTunes, amazon. ..pretty much any platform that you can purchase music on!
A full Album Wil be available approx the end of October with Show Dates to follow!
We also have a LIVE Performance recorded and available to view on youtube for a taste of the Dead Fuks songs to come!

MMP –  Tell me about some the songs on the first CD?

I’m working on the last question you sent

The Guitar,Bass and Drums for Hunting Down the Enemy,Collaborative Carnage and NUMB were recorded a couple months before Emilie joined The Dead Fuks….she went back into the studio and put the Vocals on 4 months later.

Pandemic and Down were written as a Band and we went into the studio and recorded them Live as a band!!!

The  Collaborative Carnage EP is unmixed and raw!

The 5 tracks on the EP will also be mixed and on the Full length!

The Collaborative Carnage EP will also be pressed on limited edition vinyl as is Unmixed for those Hardcore Dead Fuks fans!

MMP –  Do you have any side projects?

The Dead Fuks – Myself I play in a Death/Power Metal band called Age Of Misconduct out of Kitchener Ontario,the other members I’m not sure

MMP –  Who are some of your musical influences?

The Dead Fuks – Nothing at the moment…..for me New Music is a bit stale right now!….I like what old thrash and metal bands have been doing lately but no one is catching my eye at this time!
….everyone wants to sound like someone else….there is a Huge LACK of original music being made at present

The Dead Fuks – The Dead Fuks Live I would say are Explosive, in yer Fuking Face….Driving Groove Riffs…..a real Punky Attitude but we ATTACK with a HEAVY Metal sound….with Lyrics that hit home to Everyone….Emilies Vocals will tear right threw you!!!
Watching the Dead Fuks perform is a real Power Trip!

MMP –  Have you guys ever played in another country?

The Dead Fuks –  Not as of yet,we have been offered some shows in California,Mexico,Brazil and Japan but it’s just not the right time for the band to travel at this point.
In the fall we are looking at some dates here in Canada in the Maritime, Vancouver and Montreal and Should make it to Buffalo in the winter which we will keep everybody Informed about on The Dead Fuks FaceBook page

MMP –  How big of crowd shows up at shows usually?

The Dead Fuks – We have only played 2 shows so far and the turnout has been approx 75 people..and the Crowds have been Awsome!

The Dead Fuks – The Response has been Way better than expected!
We play all Originals,we don’t do any covers
….after our shows fans in person and threw mess and email say they Really Relate to our Sound and Lyrics and numerous people have told us it’s sounds like The Dead Fuks have been around for ever!
After our shows we had A lot of downloads so we feel the music is reaching people!

MMP –  When do you guys plan on writing any new material?

I have the guitar riffs for about 6 New tracks,Trevor has most of the Bass Lines down and Em has most of the Lyrics complete.
Kevin has drum tracks for at least 4 of these new songs so we are like 85% there!

MMP –   What does the future hold for the band??

The Dead Fuks – Within the next year you will see a Full Dead Fuks record and ALOT of shows coming up!

…also,The Dead Fuks have been working on a all HORROR Type Theme show ….a real creep show gore fest….freak acts ,strange crafts ,live paintings and KILLER MUSIC,real visual!….somewhere around next spring this should be happening!

The Dead Fuks have such a tight mesh,such a tight bond…our creativity flows with ease when the 4 of us get together!…it’s ALWAYS a Collaborative Carnage!

I see many years making music with The Dead Fuks…what we are doing now is just the beginning of something HUGE!

Thanxs very much Charles!….I appreciate you showing an interest in The Dead Fuks….and spending the time listening to me! / The Dead Fuks