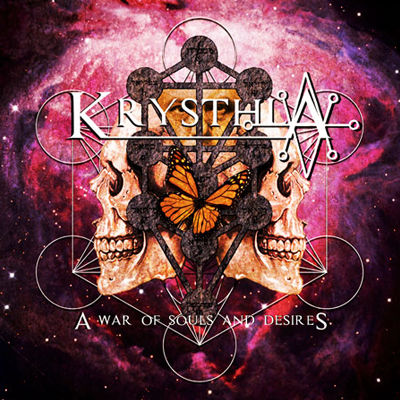 MMP – How did the band get started?
Four of the five of us were in a band called Gutworm prior to Krysthla. That was from 1998-2009 so we know each other pretty well! After we finished with Gutworm in Dec 2009, Neil called us all in early 2012  to say he had some ideas for a new project, and he wanted to get a band back together with the addition of Adi on vocals. The result is Krysthla.
MMP – What kind of music do you play?

Krysthla. Absolutely mindblowing. The reaction from both the fans, the reviewers, and the industry has been superb. We are very grateful for all the nice things that have been said about us.

Krysthla is derived from the 7 core tones of creation.  KA RA YA SA TA HA LA
It is also the origin of the names Christ and Allah. Originally

KRYST and H-LA but changed through oral tradition and interpretation over the years.
MMP – Introduce the band members and what they do in the band?

Krysthla.Neil writes the vast majority of the ideas for each song, although everyone contributes to their own individual parts, so we add our own feel to the bass, drums, vocal delivery etc.

Krysthla. They are a twisted hybrid of real world events. Things that we see every day. War, politics, people struggling to live in a modern day existence, and the ancient ritualistic influence of our “leaders” that still pushes and pulls us around like cattle.

Krysthla.It all depends on your will and intent. There’s no right or wrong with Magic/Magik unless you mean people harm or wish to manipulate someone or a situation. More people are beginning to open up to the idea of self enlightenment and awareness, “Do what thou wilt etc..” but there is also a lot of misinformation out there. Where and how you direct your energies is entirely your decision. Just remember, your free will is worth more than it’s weight in gold to some people.

Krysthla. As Krysthla, our first album “A War Of Souls And Desires” was released Sept 2015.

Krysthla.We like to mix it up with fast thrashy elements and the slower groove based parts. We never really go full death metal but prefer to keep it high energy and more intense. There are a lot of number encoded riffs and beat patterns on the record. Numbers used in certain occult circles are quite fun to write around.

Krysthla.No – We have been so busy with running the Krysthla machine, we are at it pretty much full time.

Krysthla.Very varied actually, we have all been listening to metal for a LOT of years, so the influence of that is probably apparent in the music. We do also have a lot of non-metal influences though so we do draw on a wide variety of musical genres for inspiration.

Krysthla.We wouldn’t say any particular current bands really have any great influence on us musically, but in terms of who we enjoy, we are looking forward to playing with Gojira, Slayer, Textures and Goatwhore this year, and of course, it was a pleasure to be able to watch Decapitated every night whilst we were on tour with them!

Krysthla.Live is where every band really comes into its own, and where every musician really wants to be. We are no exception, and we really get into the vibe of the gigs. Its normally loud, aggressive, high energy, and heavy as fuck.

Krysthla.Yeah, a LOT of countries over the years, UK, USA, and pretty much all of Europe.

Krysthla.It depends on the show. Our first run of shows this year was the tour with Decapitated and there were a good few hundred people almost every night. Obviously we are due to play some festivals over the summer so there will be big crowds at those shows.

Krysthla.Pretty fantastic to be fair. Particularly on the latest tour, when we played a lot of countries that we hadn’t been to before so considering we were playing to crowds that probably wouldn’t have seen us previously, it was awesome.

Krysthla.New material is pretty much done, just a few finishing touches to add, then we hit the studio next month to record the next album. Watch this space!

Krysthla.Looking forward at the rest of 2016, we will record the new material, then head off to play the festivals, and there will probably also be at least one more tour later in the year. See you on the road!