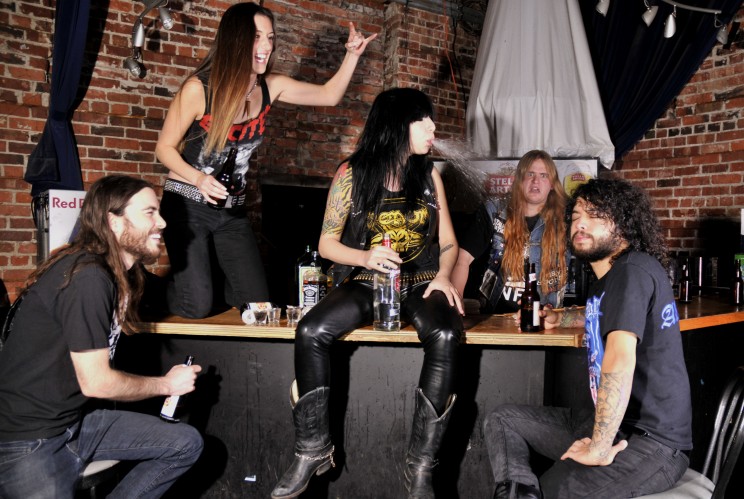 Mortillery – The band started in October of 2008 with Emily Smits on drums, Alex Gutierrez on guitar and Miranda Wolfe on bass. Shortly after Cara McCutchen joined the band after realizing the band was in need of some vocals. James Guiltner was added as a lead guitarist to finish up what was the original line up.
Shortly after we parted ways on good terms with James. Alexander Scott then joined the band.
Kevin Gaudet replaced Emily in the line-up in May 2010. Lead guitarist Alex Scott decided to leave the band and in October 2013 then, Kent Quinlan joined Mortillery.

MMP –  What kind of music do you play?

Mortillery – I’d say we fall into the Thrash Metal category.

Mortillery – Awesome! We were signed to Napalm Records fairly early in our music career which has helped us expand our fan base quite quickly. We feel very lucky.

MMP –  Where did the band name come from?

Mortillery – For months we tried to come up with a name but every cool name we came up with was taken so we just made up a word from the words mortal and artillery.

MMP –  Introduce the band members and what they do in the band?

MMP –  Who writes the music? Lyrics?

Mortillery – We all write our own parts. I write most of the lyrics. Alex has written a few too.

Mortillery – Basically I write about whatever it is that has my attention at the time. I really like learning about Cryptids, the paranormal, biology, metallurgy, animals, the apocalypse and anything bizarre really haha I’m actually pretty nerdy.

MMP –  How many albums/CD’s have you released?

Mortillery – We have released 1 EP and 2 Full Length albums.

MMP –  Tell me about some the songs on the latest CD?

Mortillery – My favorite songs on Origin of Extinction are Creature Possessor, I Am Destruction and No Way Out. These are the ones I like to play live the most. Creature Possessor is about the haunted Dybbuk box. Years ago a good friend of mine who is also really into the paranormal told me about this item. Such a fascinating story. I Am Destruction is about the tsunami in Fukushima. MY cousin was living close to Fukushima when it happened and had to evacuate his students. I went to visit him shortly after it happened. No Way Out is your typical apocalypse story. I really like playing this one live especially when we play Battle March first.

Mortillery – Yes I do! I just started a Folk Metal band. We don’t have a name yet though.

Mortillery – I’ve been listening to a lot of Tridanna and Cock Sparrer lately. Some of my staple bands are Grim Reaper, Exodus, Dissection, Virgin Steele, Nocturnal Mortem. I’m all over the map haha.
MMP –  What is the band like when you play live?

Mortillery – It’s hard to say what we are like live from someone else’s point of view. All I know is that we are having the best time of our lives on that stage and I hope that the people watching us can sense that.

Mortillery – Yes. We did a European tour in 2013 with Sepultura, Flotsam and Jetsam and Legion of the Damned. We feel so honored that we were part of that tour!

Mortillery – So much energy! The pit never stops! It’s so awesome.

Mortillery – We are actually 95% done recording our new album. Can’t wait to unleash it to the masses!

Mortillery – This fall or winter our new album will be released then we hope to hit the road. Europe? South America? U.S.? All of them? We hope to cover as much ground as possible. That’s what we live for.

Thank you so much for this opportunity and for supporting Mortillery. Hope to see you in the pit! Cheers! / Cara – Mortillery