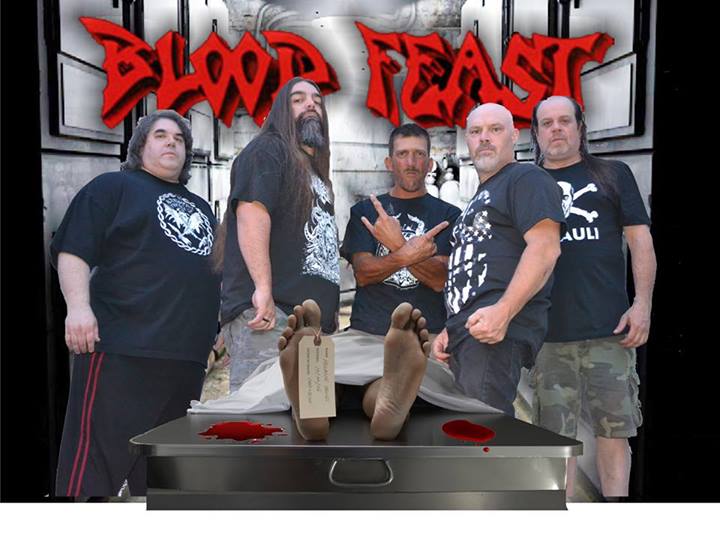 MMP – How did the band get started.

Blood Feast –  Ok..well my firsy question to u is …im in 2…which one..blood feast or seeds of perdition

Blood Feast – What band would u like to talk about? Seeds of perdition or blood feast
MMP – Blood Feast

The fan response has been amazing. From the loyal old school that has followed us to the current new fans

Blood Feast –  Well the band name originally was blood lust but it had to change ..so it became blood feat.

MMP – Introduce the band members and what they do in the band.
Blood Feast – Adam tranquilli is guitar
Tom lorenzo is bass
Joe Moore is drums
And
Cj scioscia is guitar
And myself on vocals

Blood Feast – For the new album Adam really has written 90% of it. He is the only original so he knows and has that blood feast sound..he is the guy. Cj contributed one song and im working on lyrics for one. But mostly it is all Adam.

Blood Feast – Since we are a thrash band through and through its all gotta be horror and gore..with some anger mixed in. Lol

Blood Feast – My personal view is..if there is good in the world there has to be evil right?
I don’t really have views on it..i don’t follow it..don’t know much about it. So its unfair for me to give views on it. My thing is believe whatever u want to believe and put energy into. Just don’t hurt anyone or anything.

Blood Feast – Off with their heads is the new blood feast outlook..get in our way..off with ur head..lol
There is a song called by the slice..which is about cutting people in pieces. Thats our love song…lol
This cd is going to be all brand new songs…but we do have some surprises we are working on

MMP – Do you have any side projects?
Blood Feast – Well…i have my other band seeds of perdition. ..its not a side project its more of another side of me. Cause we are a death metal band where BF is all thrash.

Blood Feast – Well when i was younger. .van halen’s david lee roth was my idol..plus kiss paul stanley. As i got older zetro from exodus…tom from slayer..chuck billy from testament..to name a few..lol

Blood Feast – When we play live u can always count on pure chaos…constant action. We put everything into our live shows. We want people to be exhausted after we are done playing. We always try to have a good time also. People pay to see us..money they worked hard for so we want to make sure they dont leave disappointed. We want to be an escape from life for an hour. So we make sure we are at our best

Blood Feast – Thats kinda of a hard thing to answer. nost of the time we are in festivals big and small with a bunch of other bands. So that hard to answer. We always have a great crowd no matter where we go but to put into numbers is kinda hard.

Blood Feast – We are already done..like i said the bew album is all brand new stuff and we are currently in the stages of recording it

Blood Feast – Future is new album…touring..going to places we have never been…doing it all over again. Lol.

Thanks for the interview,
Chris / Blood Feast