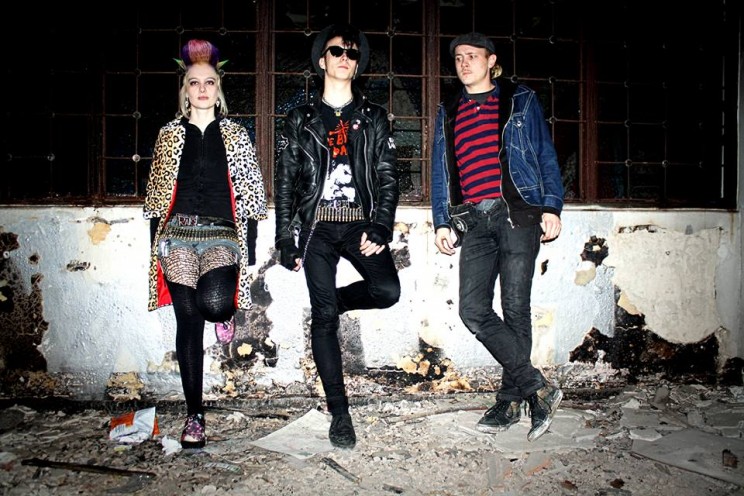 MMP – Could you describe yourselves in a few words…
No. 3: mustache, mullet hair and stoned
No. 2: grumpy and black dressed
No. 1: twirly and multi-coloured

MMP – How did the band get started?
The band started in 2009 with No. 1, Invincible Vinc on guitar and Mutant Ann on drums. Mutant Ann and No.1 played together in a band before which split up. And one day they found Invincible Vinc who wanted to learn guitar at this time. He learned it and played with the Retarded Rats until 2012 when he decided to leave the band. No. 2 joined the band than. And in 2015 Gordon joined the band on drums. And that’s where we are now.

MMP – Do you have any side projects?
Not side, but projects.
No. 1 and 2: Black Lagoon
No. 3: Degenerated and Wankerheadz

MMP – Let’s talk about the Germany Psychobilly scene. What are the current bands you like?
No. 3: Damage Done By Worms
No. 1: Phew, from Germany…difficult to say…They don’t excist anymore, but I really liked the Tazmanian Devils.
No. 2: None.

MMP – Where does the name of the band come from?
No. 1: It’s a totally stupid story. I watched a video on youtube where some guys make fun of the iPod. It was made like a commercial and the named the colours of the product. And one colour was “Retarded Red”. And I thought: “Well that sounds good! If we make a rat out of the red we could use it as band name.”

MMP – What are your main musical influences?
No. 2: Too many. For example everything from the 60’s, Surf, Garage, Black Metal, Punk, Post Punk, Death Metal
No. 3: Except Black and Death Metal everything No. 2 said.
No. 1: 60’s stuff, Garage, Punk, too. And also terrible German Punkrock, Psychobilly and Neo-Rockabilly.

MMP – And other influences (movies, substances, people, …. well whatever you could imagine)?
No. 1: The sruggling with myself and the things happening in this world in a good and a bad way.
No. 3: I don’t know. I’m stoned.
No. 2: Nature and splatter movies and the stupidity of humankind.

MMP – Please describe “psychobilly” for our readers!
No. 1: For me it is very energetic music that gives you the space to be serious and totally crazy at the same time. It’s a bastard genre of Rockabilly and Punk and for me it has also Garage Punk influences. This gives you a lot of freedom to behave and write songs, even if I know that this is only my definition. A lot of Psychobillies doesn’t see it like that. Some of them have a stick up their asses.

MMP – Have you guys ever played in another country?
Yes. We played a lot of shows through Europe. Spain, Italy, Great Britain, Netherlands, Belgium, Switzerland, Austria and France.

MMP – Describe the diversity of fans that attend your live shows?
Well, there are different types of idiots that attend our shows. Haha. No, just kiddin’.
There are a lot of Psychobillies, but a growing number of Punks as well. And sometimes some Metalheads.

MMP – When do you guys plan on writing any new material?
Right in this moment. A few weeks ago we released our 2nd album “Screams From The 10th Planet”. Now we’re planning the next release. It’ll be a double 7inch. Two songs are nearly finished. We hope to record in the end of the year and bring it out in the beginning of 2017.

MMP – What are the future tour plans for The Retarded Rats?
We’re going on tour in 2 days in Germany, Belgium, Great Britain, France, Switzerland and Netherlands. Furthermore we plan a Japan tour next week. We’re thrilled!