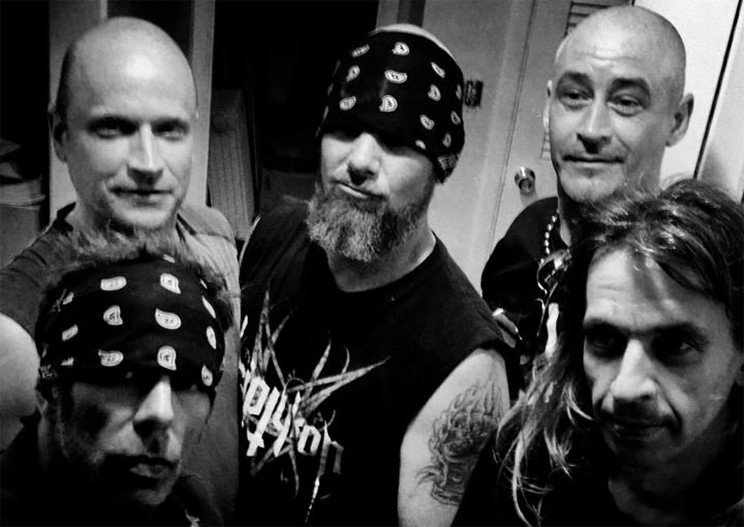 Wehrmacht  –  We were all friends in high school, Marco, Tito and I went to Franklin HS and Shann and Brian went to Grant. We brought our separate bands together (Altar and Villian respectively ) and formed Wehrmacht

Wehrmacht  –  I would say that we play extreme speed metal with a huge punk/crossover influence.

Wehrmacht  – Our fan response to us playing live? Awesome!!! Our fans are the best, totally crazy. Check out the live video from CZ in 2014. On YouTube type in: Wehrmacht live OEF 2014. It’s a super pro shot video of our song “Gore Flix” when we played the Obsene Extreme Festival 2014 in the CZ Republic. The crowd is really entertaining and funny. There’s even a guy riding a hoppity hop. In Bogota Colombia, we had a meet and greet with @ 50 fans and they brought us gifts, bought our booze, took selfies, shared stories and had a great time. Our fans are close friends whom we love and cherish. Sounds corny but it’s true. Us metal heads are the best people

Wehrmacht  – our band name came from a WW2 history book. Shann came up with and we all liked the sound of it. We were young a really didn’t realize it’s true meaning but it sure sounded cool

Wehrmacht  – we all write music and lyrics. Marco, Duffy and Lehfeldt do most if the riffs and arranging where Erik and Shann do more of the lyrics. It’s a total group effort

MMP – And where do the lyric ideas come from/What is your view in Satanism and Occultism?

Wehrmacht  – I’ll combine the next two questions. Mostly our lyrics/song ideas come from personal experiences or just subjects of interest. Which don’t include Satanism or occults. None of us dabble enough nor is it a subject that fits with Wehrmacht. Our songs are truly about enjoying life mostly. If we touch on darker subjects, it’s usually personal or based more in concrete reality versus fantasy. Our newer songs have some pretty uplifting messages I think. Pretty positive for the most part. And we stay away from politics as well.I’m not saying that those subjects aren’t real though because they most certainly are.
MMP – How many albums/CD’s have you released?

Wehrmacht  – We have only released two full length albums, several comps and a split 7″.

MMP –  Tell me about some the songs on the latest CD?

Wehrmacht  –  We are working on a single right now as well as laying down basic tracks for five new songs we have. Wehrmacht is not currently signed to any label but you can get any of our releases through FOAD records/Italy. They put out our awesome box set that has tons of goodies!!!

Wehrmacht  – Wehrmacht as far as side projects yes. Marco is in Spazztic Blurr and they record and tour. Shann has a band called Los Vominos and Erik and I are currently forming a band with several other Portland musicians.

Wehrmacht  – Bands that influenced me to start playing? That’s easy KISS. And actually, Ace Frehley!!! The way he plays, his look and swagger, I was hooked. I had to learn guitar and I immidiately tried to emulate and copy the Spaceman. When I did jump in and learn to play, I would jam along to entire albums as best as I could. The first full album I got down was (believe it or not) “Crimes of Passion” by Pat Benatar. Neil “Spider”Geraldo is kick ass. Guitarists that influenced me then to start playing are still some of my very favorite. Guys like Elliot Easton of the Cars. Man, that guy is ssssoooo good and underrated. I love Glenn Tipton, Adrien Smith, Larry LaLonde, Trey Spruence (Mr. Bungle)
As far as current bands I like, they are very diverse. I listen to the Cars and Devo-o all the time but I have been spinning all kinds of new and old. WERESQUATCH is a band out of Portland that has a great new record out, very thrash. With what I do for a living, I listen to music all day through headphones. Yesterday I played “Deathcult Armageddon whatever” by Dimmu Borgir and “the Hinderers” by Daath. I totally love Sweden’s Darkane. Carcass of course, Atheist, Streetwalker (Seattle) Combichrist, Havok, Psychosematic, my neighbors punk band Erratict are pretty tough. Erik, Brian and I LOVE old Van Halen, we play any of the first 6 record backstage before we go on, to pump us up. We’re kind of obsessed with them. We like to think that we’re the Van Halen of thrash

Wehrmacht  –  yes, we play in other countries. Almost exclusively. We hardly play our home town these days. We’ve been all over Euripe 4 different times, South America, USA, Japan, Australia you name it, we’ve probably been there. We’re playing in Peru this year.

Wehrmacht  – The crowds for our headlining shows generally ranges from 200-500 people or so. We’re not super big but we can draw a few. We play lots of festivals and the last one we played was in front of about 15,000 opening for Judas Priest (ForceFest, Guadalajara MEX)

Wehrmacht  –  The crowds are pretty fun, your usual stage diving and mosh pit. Our fans are very sweet ang great new friends. People in the metal community are above everyone else simply from the respect we show to each other. Metal heads don’t see race, color or religion. They see true color of character.

Wehrmacht  – we have 2 new songs we’ve been playing live (“Impala” “Want Some…?”) and the crowd response has been terrific. Our fans usually want to hear our classicks so we give em a great mix from both of our 80’s releases. It’s cool though, we’ll pull out say “Impala” about half way through our set and it sounds so classic already that the crowd immediately goes nuts. It’s a really super charged, quick riff monster song. Marco has a bunch of new stuff he’s been writing with Brian and I have quite a few new songs as well. I have three songs mostly written and we’ve been ironing out those arrangements. We’re hoping to get some label interest so we can acquire a budget for recording all our new material. We just can’t afford to pay for it ourselves. We have a friend with a studio that’s been helping us with the single were planning on putting out. A cover of Maiden’s “Wrathchild”.

Wehrmacht  – Basically, our plans for the future are putting out our new record first and foremost. We have scaled back touring for this year in an effort to get the album going quicker. We are playing next month (April 23rd, Milwaukie Wisconsin) a smaller festival show and in September we are heading down to Peru for the first time. Seems we have quite a following in South America.
Thanks for your interest in Wehrmacht and I’ll keep y’all posted on all our future shows/music merch etc… Thanks again / John R Duffy