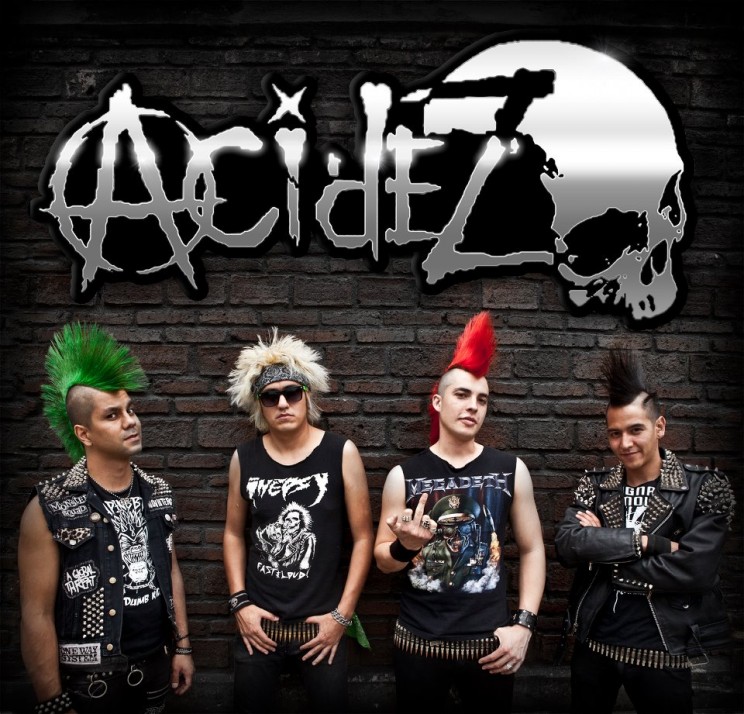 MMP –  Where did the band name come from?

Acidez – haha comes dictionary nauj drummer was in search of something that had meaning not only for having a name that nice to hear but it forward way we are
and the meaning is that the acid is corrosive enclose need to contain as the punks if you dont isolate .together we can become corrosive or dangerous for society

Acidez – All cooperate to make lyrics but leading control and creativity are tupa and nauj. and as for the music (riffs) Me and rodo Insaniac we created toghether

Acidez – Are political lyrics which talk about problems and lifestyle of our country as we like to talk about Satan, because we hate religion and we like to make fun of society .
among other things

Acidez – Do not get me wrong we are not Satanists do not believe in any higher entity we just like to make fun of the people who see it as a bad thing . but occultism is an issue that I personally could not speak because I do not have much knowledge on the subject

Acidez – Yes camino al infierno a song that is not a political point but we mock the religion and talk about us like a journey to hell to meet with satan.
Acido corrosivo  a song where we project the evolution of sound we achieved something more thrash but respecting our hardcore punk genre

Acidez – Not for the moment . I once had a  glammrock band  but did not last long. We made good songs but we never  find a vocalist

Acidez – I think we have good energy at the shows sometimes more than others but we always try to convey a good feeling.
I think we still need to polish some details but we are satisfied with what we’ve done

It depends on the event

Acidez – I think what we expect is to have more success and share our music live in different countries and cultures but who knows what the future brings new obstacles appear always I hope it’s a successful future for us.

Thank you very much for the interview / Soti – Aciedez