April 25, 2015, Lauda Konigshofen, Germany. At the annual Keep It True Festival about halfway through the scheduled time for the band Mpire Of Evil things changed. It was announced already that the band would feature a ‘very special guest’. Speculations followed this announcement but it was no shocker that this guest was someone from the mutual past of guitarist Jeff ‘Mantas’ Dunn and Tony ‘Demolition Man’ Dolan; Tony ‘Abaddon’ Bray. But first things first. 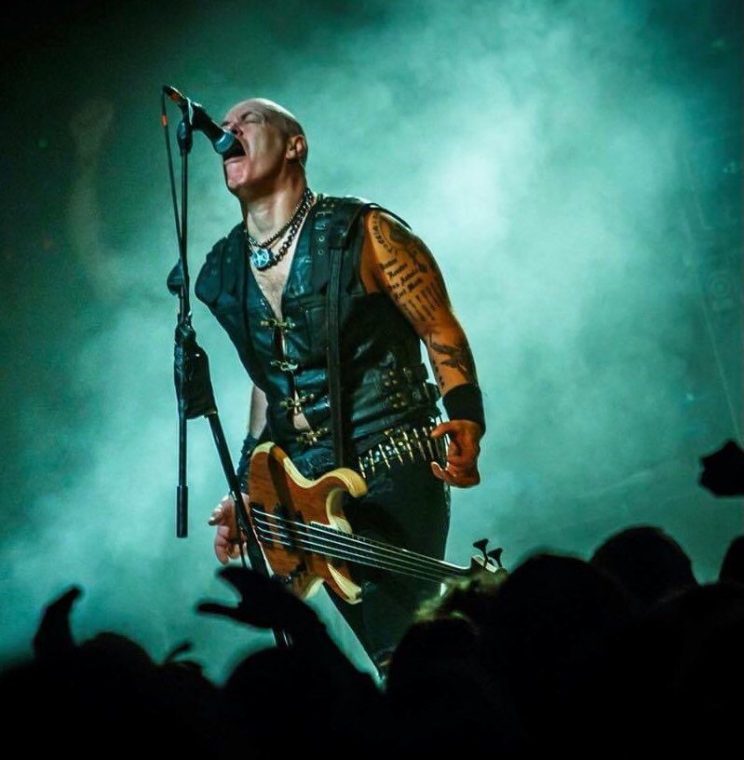 When Venom released the album ‘Prime Evil’ in 1989 it not only featured the return of Mantas in the band (after leaving in 1986), a new bass player and vocalist was presented as well; Demolition Man entered (from Atomkraft), invited by Tony ‘Abaddon’ Bray,  Dolan was asked to join and began writing immediately songs like ‘Parasite’, ‘Carnivorous’ and ‘Blackened Are The Priests’. He also told Abaddon that Mantas must be there too and so it was left to him to talk to Mantas to bring him in, as past exploits had not left Mantas very willing to do anything with Abaddon again. However he came and he and Dolan composed Prime Evil along with the rest of the album tracks. A second guitarist was also introduced too (although not appearing on the album except for the cover art,  but for live performances) with Al Barnes. The album was a return to the more known style of the band and ‘Prime Evil’ was well received by fans and media. An EP ‘Tear Your Soul Apart’ (1990) followed with two full albums as well ‘Temples Of Ice’ (1991) and ‘The Wastelands’ (1992), the latter without Barnes, he was replaced by Steve White (Atomkraft). The band fell silent after the record as Dolan and Dunn decided to end the project and Dolan relocated to London thus ending the 3 album contract with the label MFN. The original early 80’s line up later re-united for an album ‘Cast In Stone’ but didn’t hold together too long when Abaddon was fired, just before the ‘Resurrection’ album, after internal problems. The album thus featured Antony ‘Antton’ Lant (Conrad’s brother) on drums. Venom then fell on hiatus until 2006 when they returned, but without Mantas. The band went on from there with continued  line up changes.

Oliver Weinsheimer, the organizer of the Keep It True festival in Germany, attended a festival in the North of England called Brofest where Atomkraft were playing and he witnessed Mantas joining Dolan on stage for the finale numbers. Following that show Oliver contacted Dolan in 2014 to invite Mpire of Evil for the 2015 edition of Keep It True. The festival often features special treats for its audience; bands playing special sets, with previous band members or even inviting bands to reunite for the occasion. So the question came; would they consider playing a few songs with Abaddon in their time slot? If he was there could Dolan make it possible to invite him onstage for a special performance of a handful of Venom classics for the 2000 strong fans. After some debate with Mantas, who was less than excited at the prospect (he simply said no!) It was negotiated and agreed upon and so on April 25, 2015 Mpire of Evil morphed into Venom Inc for the occasion. But then…the phones started ringing! Promoters heard about the ‘reunion’ and the video posted on YouTube of the event had started to have promoters and fans asking if this was a permanent thing. At first there was some hesitation, with memories of conflict in mind but then they agreed to do some live touring; a new chance was served: Venom Inc was truly born. With Venom (as Cronos kept busy with his band) also active it came across as a bit confusing at first. But Mantas, who had started Venom, (joined by Abaddon and Clive ‘Jesus Christ’ Archer’ and finally Conrad Lant) was there and The Demolition Man (Prime Evil etc..) ánd now Abaddon; it made sense to promoters, agents  and fans alike to keep the connection even in a name., in fact they demanded it. Abaddon wanted to then refer to using the old Venom logo in that case, so it was agree; Mantas adding Iron & Steel and Dolan adding Incorporated to distinguish themselves from the Venom band already working. The logo was reworked with the addition of ‘Inc’ ,which meant nothing more than pride of their music history all encompassing of all their work, as Venom and as individuals (was the intention). Soon the Iron & Steel was ignored by fans, agents and promoters alike and they simply became known as Venom Inc from then on. In the following years the Venom Inc toured all over the world, playing clubs, festivals of all sizes and to much success. The fans greeted the legendary catalogue of the band warmly and reviews were raving. Remarkable was how different the approach of the ‘two Venoms’ was (and is); where Cronos performs mostly on festivals, Venom Inc plays everywhere where they are invited. And invited they were, more than 400 gigs in 3 years were played all over the planet. Dolan had sought help with managing as the thing was growing so fast, he turned to his old friend Jon Zazula (Megaforce records – Metallica, Anthrax etc.) to assist but Jon Z had all but retired, however he came to Dolan’s side after many conversations and the pair along with the infamous backbone of things, Marsha Zazula, worked on the bands new direction and business even bringing in Chuck Billy (Testament) to help while his band was at a quiet time. Jon Z eventually suggested the inevitable album but Dolan wasn’t keen, knowing how disruptive to the delicate of balance of anything Venom that might become. But eventually under Jon’s insistence Mantas and Dolan recorded a couple of new songs and these were given direct to Nuclear Blast (on Dolans insistence) and the band was signed just days later. What was unknown at the time was that Abaddon was working a secret deal as he had approached Dissonance records to offer them a 3 album deal on a budget price and even went so far as to creating a contract to exclude Dolan from the band. Unaware as it seems that a deal had already been struck between Nuclear Blast and the band by Dolan and Zazula. This being brought to the attention of Dolan, he decided to ignore it and considered the album they would do and keeping them together to be of more importance.

In 2017 the inevitable happened; Venom Inc released the album ‘Avé’ upon the world, produced by Mantas in his home studio in Portugal, the re-inventioning was 100% complete. The sound was sharp, the songs energetic and powerful, the lyrics in your face. The band toured on and on, with ‘Avé’ received very well by fans and press. After spending a long time on the road with each other, internal frustrations were beginning to show. After a few gigs in Asia and Australia in early 2018 they had a rest bite before the upcoming  European and US tours. Abaddon (understandably) had asked Jon Zazula for some time off for his wife to have their new baby and so didn’t want to commit on the already scheduled European tour. The tour was already booked and with the album to promote the band wondered if using a replacement for the tour would be useful, until such time that he returned. Jon Zazula said it was agreed that a dep for the tour would be ok and so they brought in their soundman from the USA tour in the person of Jeramie Kling (The Absence), who already knew most of the repertoire ánd the band members. He gladly accepted the invitation so in early 2018 Kling stepped in and became a permanent fixture. At the gig in the famous Dynamo club in Eindhoven (NL) he was “baptized” as ‘War Machine’, the alter-ego name as new permanent member in the band. His approach to the entire repertoire is impressive and he gives the band even móre power. The gigs, again all over the world, were never better and amazed the growing fan base. Apart from the numerous Venom classics and ‘Avé’ songs the band also dived into the more obscure songs, to ultimate pleasure of the loyal fans. Abaddon never returned.

Exactly 5 years after the start of the band the future is even brighter with the new album in full progress, The Demolition Man finally has his new hip, Mantas has recovered from a VERY scary heart problem (that saw him dead for 5 minute) and War Machine is getting his kit into battle mode. The new album is set to come in 2020 and post virus conditions the band will be touring as soon as possible. As for the new album; sit back and expect something special. A way of saying thank you perhaps, but certainly something for the loyal fan base! This is Venom Inc; bleeding metal, forged in hell, playing Black ‘n Roll!