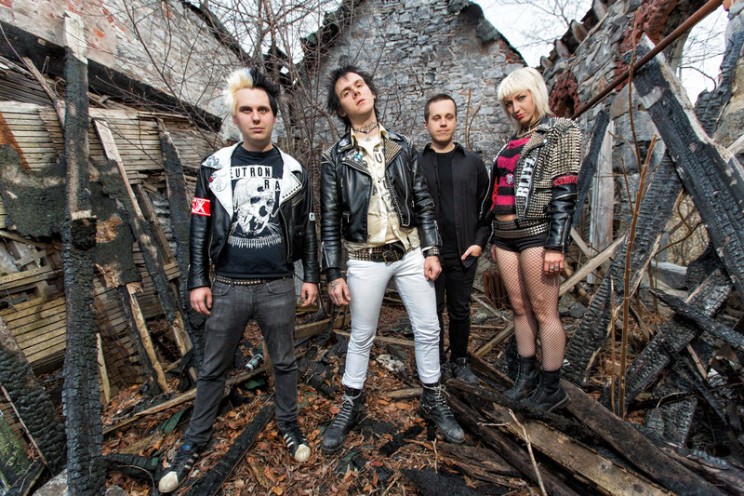 Zex – Gretchen: Jo and I wanted to start a band together, it took us a long time to find other members as the few musicians in ottawa that are here are all in multiple bands. We got all the demos done as a pair then when we found a bass player and drummer we recorded and stuck with it.

Zex – Gretchen: The kind of music one plays when they stop giving a shit about any underground labels and sub genres.

Zex – Gretchen: People seem to like us. We have an amazing time our tour and meet amazing human beings. We appreciate all the kindness that has been tossed out way throughout our journey as a band and look forward to producing some more bangers for everyone to enjoy.
over all the feed back we’ve gotten has been positive and exciting.

Zex – Gretchen: Me and Jo were having a discussion on what the band name should be. We both agreed something short, one word and has to be controversial. At first we thought “Sex” then thought we both love the letter ‘Z’ because so few bands start with that letter.
So we came up with Zex. It Stuck.

Zex – Jo: all the good names are taken, so now you have to make up words.

Zex – Gretchen: I’m from Toronto, ON. I’m loud and I have the ability to be very obnoxious at times. Punk is my universe. I am the singer in the band.
Gab is our bass player and he’s quite easily the oddest and most excitedly optimistic person I’ve ever met. Always Smiling and joking around.
Jo is our guitar player and writes the music. He’s our “bone-a-fied” babe with a vision. He organizes our tours and keeps us on a steady course. While looking pretty great in a pair of tight jeans.
Cody is our drummer. He mildly enjoys cans of beans and youtube. He’s our Mister Smarty Pants.

MMP – Who writes the music Lyrics?

Zex – Gretchen: Jo writes the music, I write a lot of the lyrics and so does he. Sometimes we even work together to complete lyrics for a song.

Zex – Gretchen: From real life experiences, dreams, opinions, desires, pains, sometimes even movies and stories.
Jo: The daily torment we’re subjected to by this despicable parasitic human race of ours. Being grinded down by just about everything. Working hard and having everyone shit all over you in the end.

Zex – Jo: im interested in Ancient Egyptian Book of the Dead, the AA, Hermetic Order of the Golden Dawn, Austin Osman Spare, Crowley, Various tribal spirituality, Catholicism, Revival Christianity and Mormonism, Free Masonry and Shriners,Templats,Cathars, Hospitaliers, and recently into Islamic history and Judaism and all kinds of other make believe stuff. Its all so intertwined and like a big game people play cause life is boring and the thought of the after life also being boring is frightening.  I also find Hinduism, Buddhism and Shinto quite fascinating ….. but
mostly im into 1970’s Horror movie Satanism. I watch these movies and wished it where all true, cause they look so good doing it ahhaa.

Zex – Gretchen: I’m a spooky bitch. I dabbled in Occultism as a teenager. Got really into it. I guess now as an adult I still find it interesting and it’s fun to write songs about.
I love viewing the world in a dark way sometimes, and sometimes I don’t. I agree with the idea of living for yourself and being your own god. I definitely live by that idea.

Zex – Gretchen: Our album is called Fight For Yourself. The title song is a song about fighting and conquering drug addiction. Fighting to stay alive and to survive through adversity.
There’s some anthem-like punk songs on there. It’s worth a listen, I think it explains itself.

Zex – Jo: Its about survival in a fucked up world and sanding up to injustice.

Zex – Gretchen: Bands that I grew up listening to gave me the urge to want to play in a punk band and go wild. Band’s like Discharge, The Expelled, The Buzzcocks, Dead Kennedy’s, The Damned… You know the classics.
but mainly I was always into music from a young age and always knew I wanted to be apart of the music world. I don’t believe in idolizing celebrities or looking up to others. It’s about wanting to be the best you can be and wanting to follow your own dreams without trying to mirror someone else.

Zex – Jo: Ya for sure all those punk bands from the 70’s and 80’s, but ultimately for Zex ,its whatever’s catchy. Zex is about drawing the links frm opposite kinds of music. Power metal songs re-written as pop punk songs.

Zex – Gretchen: I listen to punk and some metal. Currently I’m on a Heavy Load bender.
Jo: Thor

Zex – Gretchen: Energetic, fun, loud, goofy, and at times we can be serious. But we definitely put on an interesting show.
Jo: we try our very best when we play live. Its not half hearted.

Zex – Gretchen: Really depends on the city/town. We’ve play shows in jam spaces that would only fit 5 other people in them to huge venues that can fit a couple hundred. The room are always full, 90% of the time.

Zex – Jo: We operate on a very DIY level. We don’t make money doing this. Its just months of hard work that culminate in a 30 minute live show.

Zex – Gretchen: A lot of the time I think we catch people off guard. I don’t think they know what to expect and when they watch us live they mostly stand and stare. Our fans  that know us are always dancing and singing along. it’s a good time.

Zex – Jo: Were very social and strive to be kind and grateful to people at gigs, because without them, there wouldn’t be anything happening. Sometimes people get a bad first impression of us because we like to go to bed early, and we don’t do drugs and only one of us drinks.

Zex – Gretchen: We have a new single coming out in Fall 2015. We did two huge world tours this year already and currently are in the process of booking two more. So we have been really busy with that mostly. But we do play on writing more material when it comes to us.

Zex – Gretchen: Anything is possible.