Metal Franconia Fest is an event that has existed for more than a decade in lower Franconia, Germany.

The first official festival was on 01.04.2011
and lasted two days, in which they participated very big bands, making the event as attractive to the people of Bavaria as possible, and for fans from afar, because is something that must not be missed, and is a must-visit in Bavaria, Germany, in the heart of a Lower Franconia.

The festival lasts for two days, and every year it is more and more enriched with bands and quality time spent.

For us, the team of Metal Madness Promotion, this was a great honor
and pleasure to be present at this event mostly because this is our first experience outside the Balkans, and because of the wonderful atmosphere that made this experience unforgettable.

We had the honor of being photographers, was a good lineup on stage, the scene lights, allowed us to take great photos, but this is an event that is a must-visit at least once, despite the fact that it is in April, there was an incredible 20 cm of snow outside which
continued tirelessly, creating a whole Christmas story in the middle of the spring-From the loud laughter of the happy metalheads, the locals who smiled warmly at the visitors, the little metal kids who were overwhelmed by the festival which is also great for the youngest audience, the cheerful the atmosphere of drunk Bavarian beers which were constantly poured during the festival, old wooden log half-timbered framed houses, that have been in this area for centuries, and today home to dairies, farmers, and hardworking honest, and good people where after the festival we had the honor to try the Bavarian cuisine, and to hear how the most famous bands performed before the virus, as well as the desire for this festival to continue to be a symbol of the Franconia area in the future, something that must be visited many more times by our MMP team.

Finally, I will say that the whole organization was wonderful, in the future you must be there, with respect MMP 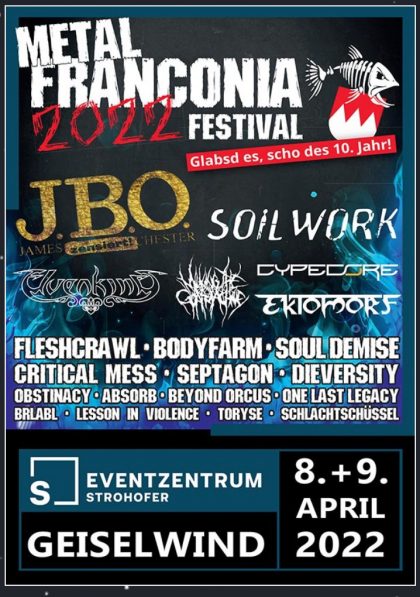