MMP- How did the band get started?
Scornage- We all played in several bands.
Me and Markus (our bass player) played together for a long time and decided to start with a new band.Thar was 1998.After some time we had a complete line up.
Then we played some shows and decided to record a mine CD.After some changes at the microphone and guitar we are in the same formation for a long time (since 2009)

MMP-What kind of music do you play?
Scornage-I think, you can call it Thrash Metal with Death influences

MMP- How has the fan response been?
From the start we had a lot of positive reactions. That’s a good reason to go on with the music. 🙂

MMP- Where did the band name come from?
Scornage- It’s the mix of the words Scorn an Age. The meaning behind it is The Age of Scorn. 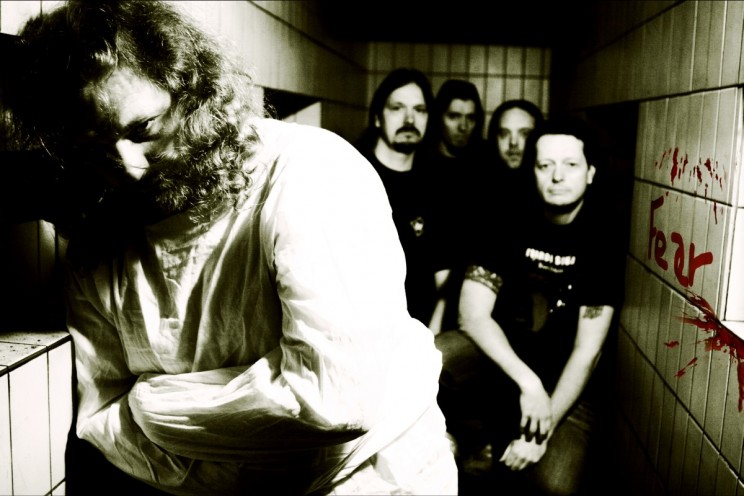 MMP- Who writes the music? Lyrics?
Scornage- Mostly there is a riff or song idea from one of the guitarrists. Later in the rehearsal room the other band members put their ideas into the song.
The lyrics come from Guido.

MMP-  And where do the lyric ideas come from?
Scornage-From  Guido, hahaha 😉 The lyrics are about social things and all the stuff, what is not ok in this world for us. There are religious songs, songs about polititions
or the fears of some people.

MMP-   What is your view in Satanism and Occultism?
Scornage-That’s not my cup of tea. Everyone should do what he wants.

MMP-  How many albums/CD’s have you released?

MMP-  Tell me about some the songs on the latest CD?
Scornage- All songs have the same idea. FEAR !!! It’s about all fears people have and can have. Some against society, some of being alone and helpless.

MMP-  Do you have any side projects?
Scornage- Scornage uses to play as  sometimes. Nonne Kati is a band, who wrote all Rock’n Roll and Metal songs in the world and bands like AC DC, Motörhead and Slayer
have stoled these songs to make money 🙂

MMP- Who are some of your musical influences?
Scornage- The influences of the band members are different. It’s from Punk, Black Metal, Death Metal, Progressive Metal. I’m into Bay area Thrash and Skandinavian Thrash Metal.

MMP- What is the band like when you play live?
Scornage- We’re near to the crowd and mostly funny. It’s cool when the audiance is a part of the show. That’s what we try to mange when we play live.

MMP- Have you guys ever played in another country?
Scornage- We had 3 tours with some bands from Tokyo / Japan in Europe.
We played in the Netherlads, Belgium, Luxemburg, Austria, Switzerland, Italy and France. I think that’s all.

MMP-  How is the crowd response when you play?
Scornage-Mostly it’s positive feedback

MMP- What do you think of the US Black Metal/Death Metal scene?
Scornage-Oh, I dont’t know enough about it to tell some interesting facts, sorry.
I like to listen to bands like Exorder, Death or Dark angel. But I’m not really into this scene.

MMP-   When do you guys plan on writing any new material?
Scornage- We had a break after our last CD because of playing live and promote the latest CD. After that we’ll write some new stuff and we’ll see, when we have enough to get a new CD.
No stress and time problems 😉

MMP- What does the future hold for the band??
Scornage-We’ll see. Playing live, having fun and Rock’n Roll……

Thanks for the interview,
Arry / Scornage