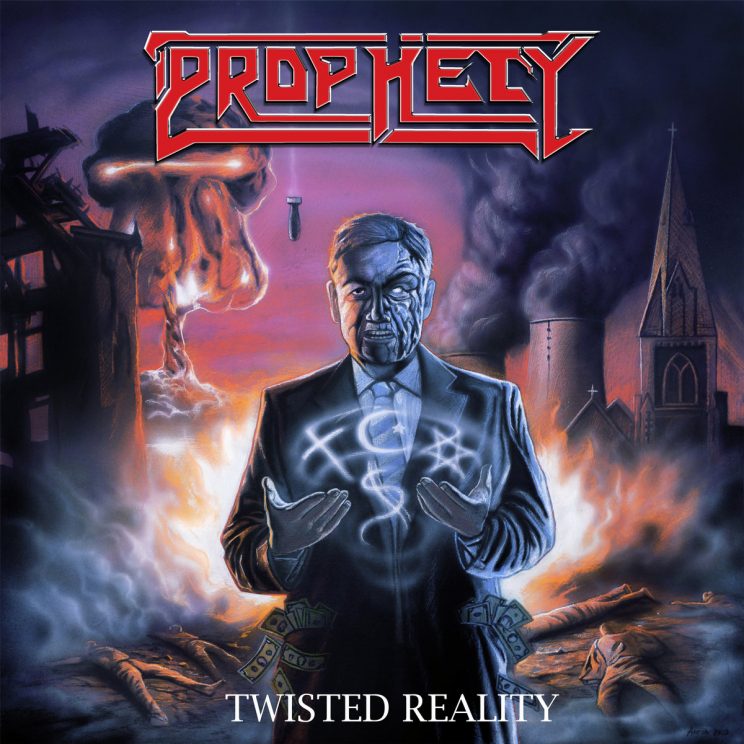 One day going to work a friend of mine send me a link to a band named Prophecy.

When I open the link it pops up Youtube audio to Twisted reality, I saw the cover while listening to the song and was impressed by this old-school bay aria thrash band.

the cover reminded me of some of Ed Repca’s artwork nuclear bombs, filthy businessmen with full pockets of money showing the smoke formed like religious symbols

Then 10 minutes later I received another message from my friend Nikolay Atanasov ( guitarist for Agen Steel (USA) ), asking me did I like his band.

I was like yeah men I like the new Agent steel album, and he was no I speak about Prophecy. I was shocked because like I said earlier the band sounds like an 80s Bay aria.

So after this short story let’s dive into the album and see what I like and what I think is a little bit of downfall.

The album contains 8 songs and each of the songs is about politics, corruption, brainwashing, society and etc., etc.

the album starts with a short song intro about the new world order. this song sound more on the heavy metal side than thrash, but when I mean heavy metal then thrash… is not exactly heavy metal

they are in this magic realm heavier for heavy metal but a little bit softer for thrash ( when I said thrash I mean bands like Exodus, Slayer, Testament.)

the vocals remind me a little bit of Chris Boltendahl ( Grave Digger ). NWO is the only song that doesn’t have so many lyrics and that’s the downside because the last couple of seconds…. let’s say 1 min. they just repeat New World Order. Ok, I get it, so please when you guys play live just don’t repeat so much NWO.

Twisted Reality is basically what it says, a song about the fucked up place we live. Lyric this time is longer but it’s normal since the whole planet basically is like a toilet, you can’t describe all problems just with 1 sentence. The downside for me is the band keeps almost the same riff for the whole song, but hey a lot of brands create their names just playing 3 cords.

The system of slavery is about how we don’t have a normal life and have always been slaves to the system. In this song, you can hear some harmonies that remind you of old-school heavy metal bands from the 80s.

Condemned to Insanity for me is the most stand-up song. Fast and heavy riffs. Now we talk about Thrash as a thrash, not like this speedy thrash a sort of Metal church that you couldn’t put them exactly in style. Again the lyric is about our daily life and how shitty and shady is the situation in the world is.

At that point, I think you got already know what to expect from the album.

it’s mixed between heavy and thrash metal. Like a lot of the bands did during the ’80s, even around 35min, I heard riffs that remind me little of Exodus – children of worthless god.

This album is really good, definitely not gonna blow your mind, but if you got it you not gonna be disappointed.

I really enjoy it from 1st second to the last.

Like I said from the cover of the album you can expect to be an 80s metal band.

P.S. Need to check their latest album from 2019 Mental Punishment